mad4mini motorsport were busy running cars in all three Cooper classes of MINI Challenge and the drivers kept them on their toes. Running this weekend: Andy Ringland #66 – Cooper Am, Morgan Wroot #38 – Cooper Pro and the legend – my hubby – Stuart McLaren #12 – Cooper S.

It was a tough weekend with some fantastic competition making the trip around paddock hill bend and druids all that more exciting. Stuart landed 3x P3 finishes which were nobly won. Some great driving from the others at the front of the pack.

As if the trophies weren’t enough the amazing marshals and Rhea from MINI Challenge got Lewis our boy up to the podium to hand out the trophies for Race 2. Amazing moment for Dad and Son. Thanks to those who made it happen.

Andy took some damage in Race 1 and those in the paddock rallied around to get parts for mad4mini motorsport to get it fixed. Thanks a million to all that made such a great job possible.

As ever there we couldn’t do this without our sponsors and partners. Thank you to all of them for an amazing weekend. Also sorry to those who stood anywhere near me whilst I was watching the racing – my apologies for your ear drum damage with my excited screams. Love it!

You can see some the action from Day Two of the festival on facebook: 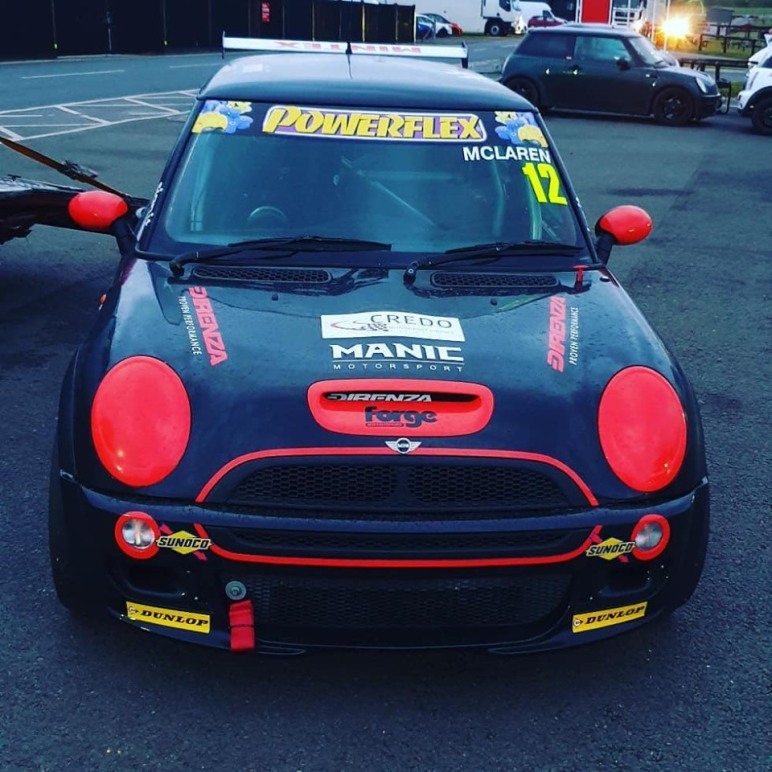 Mad4mini Motorsport have been super busy in the run up to Snetterton preparing multiple cars. They have cars in all 3 classes of the Coopers this season.

Just to add to the work of an increased team size Stuart’s R53 has undergone a major rebuild over the winter. So Snetterton would be show time. And that’s show time with no rehearsal as the extent of the rebuild meant no time for testing. But hey there’s extra adrenaline to be had doing your testing in qualifying.

Saturday 11th May – Snetterton 300 is a fantastic circuit to kick off the season and its been home to some of Stuart’s most thrilling podium finishes. The morning was cloudy and wet so qually in the wet and the afternoon race in the dry. So to add a little more excitement than we really wanted qualifying was the first time Stuart had driven the car in the wet. Oh and did I mention that the ABS decided to not work. But he took a P2 so it wasn’t all bad.

Race 1 saw Stuart slow off the line and he had dropped places by the first corner. It turns out that there were issues with the gear box. So for any of you reading that are familiar with Stuart you will know that little issues like not having third gear is not something to phase him. We all remember Brands Hatch 2018 when he took the R53 out with no windscreen! He made up two places to take the podium in the position he started in. You can see Stuart drive the fastest lap of the race here. The car looks like a handful – no wonder he loves it. It was a great start and it was such a great start the race officials decided to level things out a little and give both Stuart and Dan who took P1 a 20kg ballast plate for race 2 on Sunday.

Sunday 12th May – Race 2 was a flipped grid which is always good fun to mix it up a bit. Stuart started in P3 and that gear box was determined to not let him have a good start again and he dropped to P5. Despite the extra weight and the slow start he made up 2 places to finish P3. A fantastic start to the season and some great points in the bag.

As always there are many people to thank to make it all come together. Mad4mini Motorsport were fantastic and a huge thanks to them all and to Jim who always keeps a level head and performs a sterling job as no. 1 mechanic as always for Stuart. A huge thank you to our amazing sponsors that make it possible for us to do this. The Metal Store, Mintex, MeisterR, Direnza, VRRC and mclaren0to60. 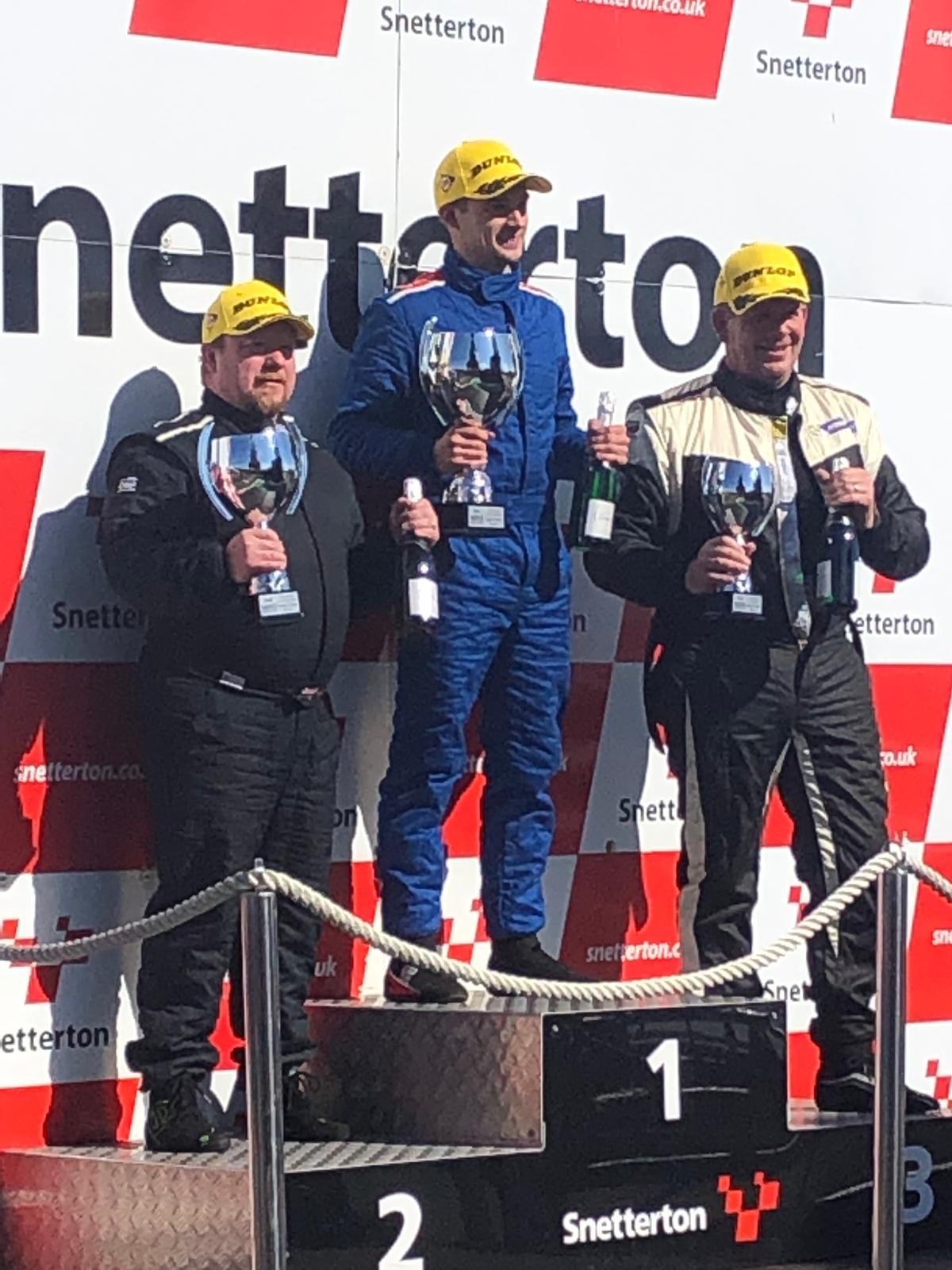 P2 in race 1 and fastest lap. Thanks to everyone that’s help with this cracking start to the season.

mad4mini you have pulled a blinder – nice one

At a cloudy Snetterton the scores are in for Cooper S. Stuart McLaren #12 is starting race 1 in P2.

This time next month will be the opening round of the Cooper MINI Challenge and its getting very exciting for all involved in the mad4mini Motorsport team. With entries in every Cooper Class (Am, Pro and S) the team will be showing off their incredible knowledge of the MINI. So there are many podiums up for grabs but also the Team Award.

If you followed Stuart McLaren #12 in his opening races of the Cooper S class you will know there were podiums and also some fine off-roading into the kitty litter at Paddock Hill bend. So the car has spent its in between season time being given some serious attention.

With the engine now in the new shell it will be time to hit the track soon for testing.

Once again a huge thanks to the sponsors that have been part of the pre-season preparation and we know you wont be disappointed once we start running. Make a date in your diary now to be there for the season opener at Snetterton.

Stuart is busy so its me blogging instead. To be fair I did most of it anyway – who knew! The 2019 season of MINI Challenge is just over a month away for the Coopers and the prep is going well, thanks to the amazing team at mad4mini motorsport. Mike and the Mechanics are fantastic and doing a great job on the build for the Cooper S car. From April onward we don’t see much of Stuart unless we head to a stretch of tarmac somewhere to see him. It’s OK though as he likes to post a #mclarenweatherreport each day so we know whether to grab the winter woolies or the summer gear.

Its Mother’s Day today and Stuart is back on the road but I wanted to say a massive thank you to our ever growing list of partners for this season. I truly appreciate you (as does the college fund for the kids). So not too many more sleeps until its lights out and it’s go go go. Thank you mad4mini, The Metal Store, Mintex, Direnza, VRRC and mclaren0to60.

A few weeks ago I went to meet the team at Virtual Reality Racing Club VRRC and to try out their sim technology. The technology is top quality and all key circuits are available. Its fully immersive with headset and motion seat. I drove a couple of cars and had some fun on the Brands Hatch circuit. I’m pleased to say that after such a great and informative day mclaren02to60 are now affiliates of VRRC. You can find me on the driver coach web page where I am in some good company.

To learn more about what is available and how you can improve your racing skills please visit: VRRC or mclaren0to60

I’m sure I won’t be the only one that does a retrospective of the year but I feel remiss if I don’t do a round up.

I’ll start by reflecting on my racing in MINI Challenge again. 2017 was amazing taking the class win in Cooper Am in my rookie season. 2018 saw the season start in Cooper Pro which was adrenaline filled. The round at Snetterton saw me knocked onto the grass in field. Not where I wanted to be but that’s racing. Whilst the car was being put back together I was offered a guest drive in the Cooper S class with mad4mini motorsport. With a podium in my inaugural weekend I was hooked staying in S until the end of the season.

I’ve got to thank mad4mini motorsport and the amazing marshals, medics and course officials who helped me following my dive into the ‘kitty litter’ at Paddock Hill Bend in the rain on slicks. My better half was out the country visiting family in Ireland and so when I was asked if I would race the next day I did what had to be done and crossed my fingers and said ‘of course not darling I’ll just be cheering from the pit lane’. What I actually meant was ‘I will remove the broken windscreen- take out the back window to avoid drag and head back out in the rain’ Good way to test a marriage me thinks!

So the end of another amazing year not so much silverware but I’ve had huge fun. It’s been great winding down for Christmas and spending time with the family. I was surprised on Christmas Day when my 10 year old gave me a present he had bought with his pocket money ……… Forza Horizon for Xbox.

For any racer that’s slid round Graceland with their heart in their mouth or only realized after crossing the finish line just how close to the wall you actually get its a sad farewell to Rockingham Circuit as it closes its doors as a racing venue.

My first visit to Rockingham was in 2001 to attend the FexEx CART World Series. The oval track was really fast and when there wasn’t racing to watch there were plenty of celebrities to spot.

I often take private clients to Rockingham to put themselves or their car through their paces. The international sports circuit is fantastic for teaching on. With so many different types of corner and camber, you can really see and feel the effect of using different techniques.

I often work for Supercar Drive Days and have driven a number of vehicles; but amongst my favourites are the Ariel Atom and of course driving the M3 Drift taxi is a real scream generator.

MINI Challenge included Rockingham as part of their season. In 2017 I was winner in my class – Cooper Am and scooped up 2 podiums that weekend. As my team in 2017, Hybrid Tune, will recall I was limping round with a broken gear box so it was a good achievement.

Running in 2018 in the Cooper S Class I took another podium. Even on the second place step I’m still the shortest!

For 2019 MINI Challenge will swap Rockingham out for Croft Circuit.

Thanks to Thrillpic Media for some of the images used.

Its been a busy day at practice. Contact led to the steering rack needing to be replaced. Thanks to Kyle Reid and SCK Motorsport for helping us out. A huge thanks to the Mad4Mini Motorsport team for taking this in their stride and getting #12 back out on the track for the end of practice.

The Mad4Mini Team got the car back out for the end of practice with a new set of Mintex brake pads to test. A great end to the day.